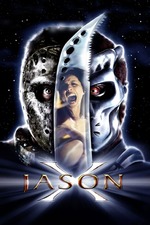 "The other viable is marked 'Voorhees'. That's not Jason Voorhees, is it?"

Now being held in a subterranean research facility, taking place in what I imagine to be an alternate timeline where either Creighton Duke doesn't exist or where he managed to kill his sole remaining relatives, Jason is the subject of intense study to find a way to harness his regenerative abilities. During an attempt to transfer him to a different facility, he escapes and kills an entire team of armed guards before being trapped in a cryogenic chamber. 455 years later, a research team, operating under the usual militaristic command structure these Post-Earth societies always take on, finds him and his latest victim still there in that room, which is the first internal error of the flick. I get that this is probably some government black book project, so not many people would be aware of the unscheduled transfer, but you'd think someone would go in and check on things. At least to recover Rowan's corpse from his icy tomb.
On the ship is Dr. Lowe, who is low enough to try and sell of reanimated people on the black market as designer pets and learns of Jason's legacy extending this far forward into the future. This is actually more believable than his body being left alone, since the same type of occult freak who would be interested in buying him 400 years from now would also be interested in buying anything connected to The Bloody Countess from 400 years ago. Anyway, when Jason gets back up to his old habits, Lowe doesn't have the same power as, say, a head in a jar with a direct connection to the computer's mainframe, so when the Sgt. Brodski decides to adopt a scorched Earth 2 policy against this hostile, there's nothing stopping him and his Grunt Team. Y'know, aside from Jason, who quickly dispatches them all.
Lowe tries to reassure the research team that there is a small army on the Solaris station ready to take him out when they dock, but Jason reaches the captain first and performs his biggest act of violence yet: driving the ship straight through the station, destroying it and killing the countless innocents who live there.
Soon after, a newly reprogrammed KM, an android on the ship, uses her impressive combat skills and advanced weaponry to completely obliterate Jason's extremities. Unfortunately, while the surviving crew has to plant explosive charges along the ship to prevent a core meltdown, a chance mishap with the Nanobots in the medbay where they leave his carcass occurs, and he is reconstructed into a cyborg version of himself. Now not only invulnerable but indestructible, he survives the point blank detonation and tears his way back in from the vacuum of space itself. He only manages 2 indirect kills before they trap him inside a simulation, fruitlessly repeating the same sleeping bag kill from The New Blood over and over on two extremely low level AIs. This works until further explosions from the still malfunctioning core shut it down. Brodski, as his last valiant act, grabs Uber Jason on his way towards the rescue vessel Tiamat and rides him down through the atmosphere of Earth 2, only to land in another lake on the planet's surface.
This is really tightly navigated production, walking the tightrope between horror and scifi very effectively, and scripted to be a good amount of comedic without going overboard. Makes no sense within the chronology, but also doesn't matter at all by this point. Jason Goes to Hell was a great sendoff, and this is a great Elsewhere story.

Best Kill: Adrienne (Kristi Angus), but special mention to Dr. Wimmer (David Cronenberg)
Best Line: Referring to the scan of Jason's body, "How does he function with a brain that small?"