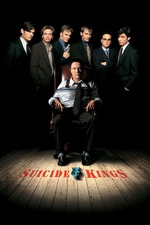 The movie just starts. Avery and the guys are gonna kidnap famous former mafia boss Charlie Barrett in order to pay a $2 mil ransom for his sister, and for every body part the kidnappers send them, Barrett loses the same. From here, every 10 or 15 minutes there's another reveal that escalates things with 4 ticking clocks: a possible mole amongst the guys, the kidnappers being complete wackadoos who would shoot eachother over what channel the tv is on, Barrett's driver Lono tracking down the guys, and Barrett's alcoholism causing him to bleed out. All the while, Barrett is playing head games. Meanwhile, Barrett's attorney is meeting with this woman, Lydia, and we get her backstory in a flashback that reminds me of the Lucky Star scene with Bullet Tooth Tony in Snatch. This leads to a new lead for Lono in a cabaret club. After a tense poker game, the dressing down of every guy there except Ira, who wasn't even in on the plan, and the revelation that Avery agreed to kidnap his own sister in order to pay off his debts, Lono arrives and takes Barrett to the hospital, with the trade still going on as planned. Or it would be, if Elise had been taken to the hospital. Barrett and Lono go to the apartment and kill the guys, only to find Elise wasn't even there. Turns out, she orchestrated everything from the getgo with Max, in order to bilk her father out of the money for the two of them to run away together and wipe out Avery's debt in one fell swoop. Barrett tracks the lovers back to Max's dad's yacht, and from here there are 3 alternate endings: the canon one where Barrett kills them both, the original ending where Barrett is moved by their love and not only lets them live but gives them 2 grand, and an intermediate ending where Barrett lets them live but keeps the money and Lono sinks the yacht. I fucking love the third ending and think if it had been the one to be released this film would have been much better received. It even comments on how Avery thinks his sister is dead and that it's his fault. It even has the reveal of Elise's plan spliced in here instead of it being part of the scene in the apartment. It strikes the perfect balance, but according to the director the studio wanted something darker. And this was apparently right after Live rebranded to Artisan, so it smacks if the usual corporate philosophy of "I gotta shit on the guy going out to make myself look bigger."

Fiddler on the Roof