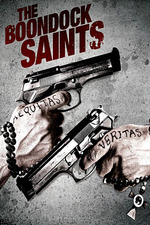 A proper action movie that rides the line between spectacle and melodrama like a clown rides a unicycle across the tightrope. Conner and Murphy are a very well performed set of twins, obviously not the same character but with enough overlap to not matter who is who. Best of all is the way Smecker is done. In most movies like this, the agent pursuing the vigilante heroes is portrayed as the worst scum alive just because they're doing their job, but Smecker's crisis of conscience leading to the confessional scene and his turnaround is masterfully done. The one thing that seemed slightly rushed, which might be due to the 3 month time skip, was the true identity of Il Duce. I expected him to be Rocco's granddad or something, but instead he finishes the MacManus family prayer and then takes over the whole Saints operation. His final conversation with the brothers before the credits roll places some doubt in my mind to how far the bounds between greater and lesser evil lie from his children's definition, and makes the fake man-on-the-street interviews seem less one sided. Finally, there's Greenly. A real great whipping biy who's never run too raw, has his moments of lucidity in the strip club and at the sick fuck's house, and even helps the Saints take down Papa Joe at the end of the picture in a blink and you'll miss it moment. Really like how the picture got so much mileage outta him.

The City of Lost Children