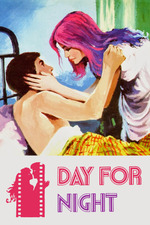 I really want to see the film they made while making this film.

Really an interesting film, François Truffaut directing himself directing a film with all of the actors playing both a part in the film within the movie and then also within the film of Day for Night. To see both their lives on screen and then behind the camera, which is ultimately still just on screen is such a unique idea. Maybe it had been done before, but I haven't seen it. Also, of great interest was more of the behind-the-scenes action as to how a film comes together - how the sets are designed, how the actors are scheduled, how they get called to set, need makeup, need stunts, etc. It's all quite fascinating and an ode to cinema and those who make it.