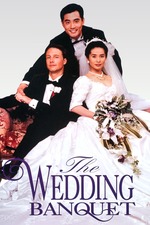 I was really enjoying this movie until Wei Wei rapes Wai-Tung. The film handles the aftermath of this corrective rape scene really strangely. We never get to see the full weight of what happened to Wai-Tung. It seems like we're going to, considering that he understandably does not want to share a bed with his rapist anymore, feels uncomfortable with touch shortly after his assault, and is unable to talk about it. But then the movie does a 180 and suddenly Wai-Tung and Wei Wei are best friends and are going to parent a child together. And the rape scene is never addressed again... Like seriously wtf???

And then it turns out Wai-Tung's father knew about Wai-Tung being gay and accepted him and his boyfriend the whole time. But let this whole farce happen anyway. And seemed grateful that Wei Wei was having Wai-Tung's child, despite knowing that there really was no way Wai-Tung would have been comfortable impregnating her.

So I Married an Axe Murderer