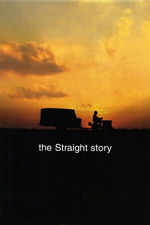 A tough guy's Nomadland with 10,000 times the potency.

Watched this on an airplane coming back from Florida yesterday and was blown away at how much harder this hit at age 45 vs. age 25. Don Draper used to say things need to be "simple, yet significant" and that statement defines this film in every way. Richard Farnsworth induces tears with nearly every quiet gesture and self-effacing declaration. His world is plain and unadorned on the surface, yet cavernous in its depth. I could watch this film every day and take something new from it.

The thing I remember most from watching this 20 years ago was how "Un-Lynch" it was. With this viewing all I could think about was how shockingly "Lynch" it was. The burning house, the bizarre admonishment of the fighting brothers (who are Chris Farley's brothers playing midwestern yokels a mere 2 years after his death), not to mention the eerie sequence of the woman hitting the deer. Her rant was epic in scope, though mundane in content. Yet when she screamed about playing Public Enemy at high volume to try and scare the deer away from her vehicle, I nearly did a spit-take with my tiny airplane-sized cola.

The centerpiece of this film is of course the scene in which Farnsworth and another old timer head into town to a local bar and spill the beans about their WWII experiences. It is one of the most heart wrenching scenes in any Lynch composition (television or film). I suppose this moment could be seen as “Un-Lynch”, but I think the most “Lynch” thing about it is when the camera pulls back to reveal the kid bartender just kind of lurking on the edge of the frame with his head down, like a guy in a dunce cap in the corner. This is a metaphor for anyone who hears such things in modern times… it’s awkwardly funny, yet poignant and sad. In fact, one scene played for laughs early on (Alvin literally unloading on his dead tractor with a shotgun), takes on a whole new meaning after his tales of being a wartime sniper are made known.

Lynch at one time called The Straight Story his “most experimental” film, yet in some ways it’s also his most human. Like Farnsworth’s beautifully etched character we mostly float through life at 5-7mph. We float into people’s lives and then back out of them. Occasionally people attach themselves to our little dinghies for a spell. Sometimes you start to tumble forward at an uncontrollable speed and must slam on the brakes. Sometimes you drive your little vessel like it’s on fire. Sometimes you just pull into port, light a cigar, and quietly watch the rain. Sometimes you meet single-serving friends and change their lives. Sometimes they change you. In the end though, nothing is as important as family. Amends must be made, and old grungy battle axes buried, because life is long yet fleeting.

Play this film at my funeral.