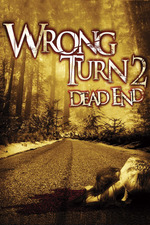 What the heck, nobody told me this series had multiple fun films?! The first one was surprisingly good, and this second one was a campy delight that even had my fav punk man Henry Rollins as a miltary vet hosting a survival reality show that goes (of course) out of control!

I got the whole (currently, apparently a new one just got announced) 6-film series on a budget price earlier today and feel like I got a bargain, I'm already liking this horror franchise a lot more than I expected