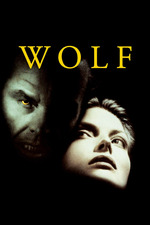 In place of Jack P. Pierce, who never received an Oscar nomination for his make-up work, I am watching this Saturn Award nominated film featuring the work of seven-time Academy Award winning make-up man Rick Baker. Directed by Mike Nichols, the film also features music composed by Ennio Morricone and the cinematography of Giuseppe Rotunno.

Driving home at night along a snowy Vermont road, MacLeish House book editor Will Randall (Jack Nicholson) accidentally runs into a large, dark wolf. He gets out to investigate and, thinking the beast is dead, he tries dragging it off the pavement to the side of the road. The wolf, however, was only stunned and bites Will's hand before running off into the woods.

The next evening at a party hosted by Will's new boss Raymond Alden (Christopher Plummer), the editor is informed that as part of a corporate buyout he's being replaced by his young protégé Stewart Swinton (James Spader). However, Will's not fired. There is a place for him in the company's Eastern European office, albeit a huge demotion. Later, Will meets Alden's daughter Laura (Michelle Pfeiffer), who takes an interest in his helplessness.

The next day, Will sleeps twenty hours straight, much to the surprise of his wife Charlotte Skylar Randall (Kate Nelligan). At work, Will notices that his sensory acuity has dramatically improved, especially his senses of smell, sight and hearing. He can detect tequila on the breath of a colleague named Gary (Stewart J. Zully), is able to edit manuscript pages without his reading glasses, and can pick up on conversations clear across the building.

At home, Will's acute sense of smell tells him Charlotte is having an affair with Stewart, which is absolutely true. He moves out. Will then visits Alden to turn down the Eastern European job, before hooking up with Laura and staying the night with her platonically. However, his dreams take him out into the woods to kill and eat a doe. The beast inside Will is awakening.

Others in the cast include Richard Jenkins as Detective Sgt. Carl Bridger, Brian Markinson as his partner Detective Wade, and Om Puri as Dr. Vijav Alezais, who gives Will a talisman to protect him. It's all leading up to some murders, some sex, and one of the best werewolf showdowns ever screened.

Besides makeup, the Saturn Awards nominated this for Best Horror Film and Nicholson, Pfeiffer and Spader for Best Acting. Jim Harrison and Wesley Strick won the prize for Best Writing, and Morricone won the ASCAP Award for Top Box Office Films. Yes, you will want to see this for the cast, makeup and music, but also for being one very good werewolf saga. Well done, Mr. Nichols!