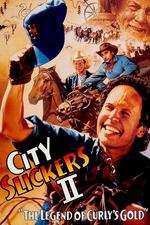 Let me start right off in saying that three reasons I enjoyed this film have absolutely nothing to do with cinema, and all three comprise the fine TV work I saw, while growing up in Canada in the 70's and 80's, that the stars Billy Crystal, Jack Palance and Jon Lovitz had made, in 'Soap', 'Ripley's Believe It or Not' and 'Saturday Night Live', respectively. I haven't even bothered seeing the original yet (the more highly-regarded work that surprisingly won a Best Supporting Actor Oscar for Palance).

I cared not a single whit about the plot--it was just fun watching the stars interact and riff off of each other. I did feel that the direction lagged in places, and perhaps a more objective editor could have sliced 10-15 minutes off and no one would have been the wiser. Not bad considering it was a sequel--it's worth a couple of watches, though I'm not surprised, and I'm a tad relieved, that no more of them were made.