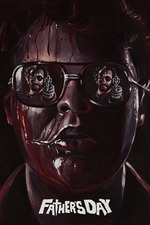 I watched The Editor a while back and, while I enjoyed it quite a bit, I wasn’t in love with it enough to start delving into other stuff by Astron-6. That was a mistake. A mistake I seem to make all too often. I mean, I’ve lost count of how many times I've said that in reviews. It’s not like I don’t want to watch stuff. I want to watch all the things. So many things that I can’t be arsed to add them all to my LB watchlist. And, it's not like I can watch them all at once. I gotta start somewhere. So some things just end up waiting a while. Had I bothered looking into Astron-6, however, I would have realized these guys are Canadian. I also would have realized some of them also made The Void, which I appreciated for its practical effects. So, here’s me, late to the party once again. Better late than never though, I suppose.

Stop me if you've heard this one before. A one-eyed man named Ahab teams up with his stripper sister, a priest, and a twink named Twink, in order to hunt down a serial killer named Fuchman, who rapes and murders fathers.

Anyway, I loved this. It's depraved, hilarious, and covered in goopy practical effects, and the Lloyd Kaufman cameo, as God/The Devil, was the icing on the cake. I mean, come on. Dicks being bitten off, strippers getting chainsaw facelifts, fathers being anally raped and brutally murdered, children getting their eyeballs slit open, priests threatening to shoot God, and a jolly jaunt straight to hell. What’s not to love?

"Chad, didn’t you tell him about the twinkies?"
- God

The Lovers on the Bridge