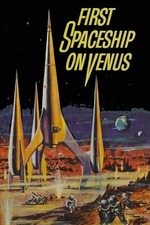 This Polish/East german co-production is quite a breath of fresh air if you have been feeding yourself on a steady diet of American scifimovies from the fifties and the sixties, if only for the fact that the propaganda is different and that it actually has a cast of mixed races, something you'd never see in any of the old American ones.

A strange cylinder is found on earth and it is soon revealed that it was sent from Venus with some sort of message. An expedition to the planet is mounted and as soon as they land they find evidence of some kind of catastrophe. Oh, and a giant pool of malevolent sludge. I like giant blobs.

Ok, so the propaganda may be different but it still is quite heavyhanded. I don't really care about that though the stoic speeches about the dangers of nuclear weapons does tend to be slightly grating. Fortunately this does serve its purpose when the spaceshp lands on venus and finds a surrealistic wasteland full of metal insects, dead cities and strange spheres. The set designs and miniatures are quite nice and the atmosphere on Venus makes you forget all the negatives before it. So the acting tends to be quite bad at times but who cares when you have a giant pool of malevolent sludge?