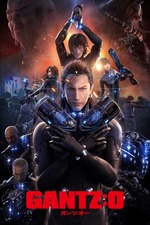 As a huge fan of the manga I was quite stunned to find this on Netflix, days before it even had a bluray release in Japan. I had seen the trailer already and was hoping that the animated movie would capture some of the gritty wow-factor that the movies missed out on. And I wasn't disappointed there. Sure, it will confuse a viewer not familiar with the manga as it throws you into the middle of the story, halfway through the manga but it should be understandable enough. The manga is pretty messed up storywise anyway.

Masaru Kato is murdered by a psycho with a knife on the subway and somehow wakes up in a small room with a giant black ball and some people wearing strange suits. He is told that he has to find and kill a person and suddenly finds himself thrust into a bloody massacre on the streets of Osaka where giant monsters are roaming the streets causing death and destruction, with the ultimate goal a certain creature. Total mayhem mode on.

What we have here is a typically Japanese manga adaptation with a shitload of cringeworthy dialogue and human interactions that could only exist in the world of manga and anime. I think that is the reason why I totally gave up on anime years ago, you do not want to spend hours and hours banging your head on the wall because a writer has no clue on how a woman behaves, instead fullfilling his own strange wishes or ideas. Gantz is fairly low on this compared to some fortunately and all of this is fairly minor compared to the real star of this show. Monsters. And these monsters are great. The bloody action is plentiful and the animation some of the best I have ever seen, so good at times that the only thing that takes you out of the illusion are the characters faces.

So, if you are a fan of the manga but thought the movies where a bit tame, you'll enjoy this a bit more. Some liberties with the original story are taken but it's all done well. And now I have to reread the manga.