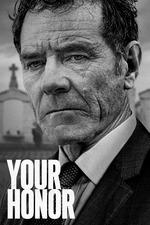 Bryan Cranston is a fantastic actor. the way he seamlessly changes his facial expression and body language in a matter of seconds from one scene to another is superb, may be even unparalleled in some moments.
However, the series as a whole was hollow, may be except its ending which gave it a kind of sick poetic justice for all his character's action from beginning to an end while generally being flowed.
It's character development was mostly non existent, the moral dilemmas weren't explored for such long hours mini series (nearly 10 hours) there are so many unanswered questions which leaves the viewer why they were even brought up into the story in the first place (like the affair of the Judge's wife or why she was murdered, who murdered her, how did the judge reacted to her infidelity, did he has anything to do with her murder …).
After all, this mini series was a disappointment.

Judas and the Black Messiah