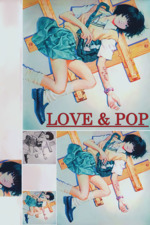 Hideaki Anno just can't do anything conventional, can he?

This film which is his live-action debut made directly after the mammoth known as The End of Evangelion is as existential and experimental as any of his previous work. Here, Anno disregards any conventions when come to cinematography and editing by shooting with cheap digital cameras from all sorts of obscure angles you can think of, while editing a scene from 10 different angles at breakneck pace, it's almost like he's a kid who'd just discovered what a camera is for the first time --- and I love it.

This visual style which captures youth's energy, confusion, and view of the world so perfectly, combined with the film's compelling themes of youth really manages to knock me out cold. In this time in my life, a film like this is truly a gift.

Thank you, Hideaki Anno. You truly are a master.