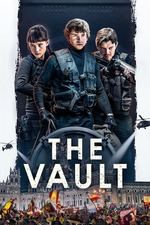 The Vault, a heist-thriller directed by horror veteran Jaume Balagueró (the REC series), is nothing if not a formulaic film that apparently took five screenwriters to develop it into a relatively coherent script. There’s little here that can be described as surprising or shocking as Balagueró, a genre director with a classically unobtrusive style, takes an international cast through comfortingly familiar plot beats—each a slight, barely noticeable iteration on the last. Only the setting, Spain, and the year, 2010, offer any real difference from other similar genre entries. Yet for all that familiarity, The Vault manages to remain a superficially engaging addition through a two-hour running time that rarely feels superfluous.

ThatShelf.com is using Letterboxd to share updates and lists with its audience. Join here.

WeWork: or The Making and Breaking of a…