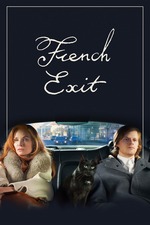 What is it about cats that bring out the best in Michelle Pfeiffer? Her role as Frances Price in French Exit is up there with Catwoman in Batman Returns. As the reserved and unabashedly cold socialite of French Exit, Pfeiffer plays opposite a little black cat named Small Frank. He’s one heck of a screen partner, and a purrfect counterpoint to Pfeiffer’s own unlikely feline character. In Pfeiffer’s hands, Frances Price could easily be the reincarnation of that cat from the Fancy Feast commercials that ate moist and delicious morsels from crystal goblets. The performance should have been this year’s Best Actress winner. Like the prissy and fluffy kitty, Frances knows good taste, yet she is pure class and elegance, accustom to only the finest and demanding it with her best-in-show poise and composure.

This adaptation of Patrick deWitt’s novel is a deadpan hilarious character study of old money in a new reality. The film might not quite match the league of its source material, but it fares far better than de Witt’s previous book to get the big screen treatment, The Sisters Brothers. Where Jacques Audiard starkly reimagined Sisters’ black comedy, French Exit director Azazel Jacobs (The Lovers) hones in on wacky characters who enliven the drabbest of settings. Pfeiffer lands such a perfect comedic beat that one would think de Witt wrote the book with her in mind. Pfeiffer carries French Exit with a tour-de-force performance that ranks among her strongest work.

ThatShelf.com is using Letterboxd to share updates and lists with its audience. Join here.