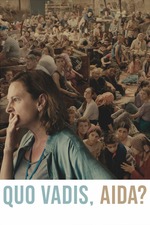 Regular readers should recognize high praise when I say that the title that immediately comes to mind for comparing Quo Vadis, Aida? is Sophie’s Choice. This film truly devastates. Like the Meryl Streep drama that brings audiences to tears, Quo Vadis, Aida? is a tough yet truly moving film. Aida is Bosnia-Herzegovina’s nominee in the Oscar race for Best International Feature, and it could be a wild card. One watches Quo Vadis, Aida? with one’s stomach in a knot and one’s teeth clenched, ready for the worst. This tautly crafted film leaves one breathless.

The Sophie’s Choice likeness arises not through some life-altering decision for Aida, the film’s titular character. Rather, it pertains to a choice that someone else makes for her. Sophie’s Choice echoes throughout Quo Vadis, Aida? in its resonant sense of loss. The film aches as Aida (Jasna Ðuričić) puts every effort of her being into saving her two sons. She may have a favourite, but the only outcome she accepts is safety for them both.