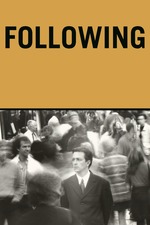 Well, well, well. What a FABULOUS debut from Christopher Nolan this truly is. Having recently seen ‘Tenet’, I had completed Nolan’s filmography bar this first picture of his. I’ve been astounded on the whole by his work and I had feared that due to the film’s low budget and age that it may not hold up to his big budget sci-if head-twisters or his equally delightful early noir mystery thrillers. Having now watched the film, I know my reluctance to watch was foolish at the very least. This film is so very similar to 2000’s ‘Memento’ in layout and overall feel to it. The score by David Julyan is just as hauntingly eerie as his for ‘Memento’ and this helps build the uneasy atmosphere. The plot is, on the face of it, simplistic but secretly hides an awfully clever narrative with delightful twists along the way. Despite its short runtime the film feels fully complete and all three main characters are given the right amount of characterisation even with the story’s fast pace. The acting from the three is also so very commendable and professional allowing this picture to transcend its “first film, low budget” label that it starts off with before watching. As you’ll see if you glance at my Nolan Ranked List, you’ll see this has beaten greats such as ‘Interstellar’, ‘Inception’ and two of the ‘Dark Knight Trilogy’ as I was truly blown away by its quality. It’s definitely Nolan at his most art house and although most people love him for his sci-fi blockbusters (which I find utterly awesome of course), i think Nolan is at his finest with his mystery, noir-esque thrillers such as ‘Memento’, ‘Insomnia’ and ‘The Prestige’. This film fits more than comfortably into that category and undoubtedly deserves such a high score for its bold and unwavering originality in the field of film.