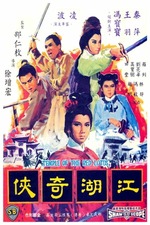 Temple of the Red Lotus

The Shaw Brothers dove headfirst into wuxia in 1965 with this, the first in a trilogy previously adapted in an epic serial (one of the longest movies ever) in 1928. Future luminaries abound, from Jimmy Wang Yu and Lo Lieh making their debuts, to reliable supporting actors like Tien Feng and The Love Eterne star Ivy Ling Po, to future director-choreographers Lau Kar-leung, Yuen Woo-ping and Tong Gaai as stuntman extras. Wang's a young man who gets caught up in a gang war he doesn't understand while he seeks some revenge for his murdered parents and falls for a pretty girl. Long sections of taking and walking feel like they belong more to the huangmei world than wuxia There's a sequence done much, much better a decade later in Shaolin Mantis, where the young lovers have to escape a compound by besting various family members: instead of fighting their way out, they mostly accomplish their escape through begging and whining. What action there is is generally too sped up and too quickly edited, director Hsu Tsung-Hung would go on to only minor successes through the rest of his Shaws career. The final sequences, multi-person combat intricately choreographed and patiently shot, with the occasional ingenious device, are a hint of better things to come.

Swordsman III: The East Is Red