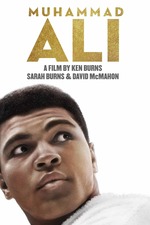 It was wonderful to gather around the TV for four nights in a row to watch the new multi-part PBS documentary Muhammad Ali, a Ken Burns production that was also co-directed by his daughter Sarah Burns and her husband Ken McMahon. (You can stream the doc now through the network website.) Amusingly, my father - who watched all of Ali's televised bouts back in the day, would often "spoil" (if such a thing is possible) the outcomes by saying, for example, "Oh, he causes a knockout in [insert number here] round." It drove my mother crazy, but I thought it added a certain je ne sais quoi to the event.

The film captures Ali in all of his infinite contradictions: a remarkable athlete in a horribly brutal sport that damaged his body and psyche immeasurably; a student who struggled through grade school with dyslexia yet became an extraordinarily eloquent orator (often simultaneously funny and mean in his insults of opponents); a Black man shaped by his youth in racially-segregated Kentucky who sought greater knowledge and meaning in his conversion to Islam; his claims to following his religion's teachings juxtaposed with his frequent infidelity to his first three wives; his outspoken opposition to the Vietnam War as a conscientious objector, a fight that went all the way to the United States Supreme Court to determine whether or not he should be sent to prison for challenging the military draft; and the constant back and forth between how the American public perceived him - always dependent on his success in the ring - eventually coming around to respect and reverence once more when the full effects of his battle against Parkinson's disease were laid bare on the world's greatest stage, unavoidably visible during the lighting of the torch for the 1996 Olympic Games in Atlanta.

Some of the music cues are really on the nose in an I, Tonya kind of way that feels distracting, and I can't help feeling that there are some missing elements that keep the work from being definitive - it would have been nice to spend a few minutes on Ali's starring role in his The Greatest biopic from 1977, as well as a brief nod to his Parkinson's-related charitable efforts done in collaboration with Michael J. Fox; also, did George Foreman decline interviews? - but the entire work is very strong and often quite moving. Keith David's narration is the right glue to hold the narrative together and the engine needed to propel it forward, and the fourth (and final) part of the documentary is an inexorably emotional experience, prompting me to shed a waterfall of tears as the directors gently push toward Ali's inevitable passing.

Muhammad Ali is a spectacle, as well as it should be - the man himself was indeed spectacular.