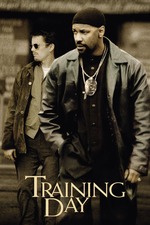 I see a lot of positive responses to Training Day that are predicated on the notion that Denzel Washington is extremely cool. Yes, that's true... but... why should that make this film any better than the substandard thriller that it so clearly is?

Given the massive disappointment that accompanied Washington's loss at the 1993 Oscars for Malcolm X, it's practically poetic that his performance in Antoine Fuqua's day-long drama is as over-the-top as Al Pacino's was in Scent of a Woman. Despite Washington's magnetic turn as corrupt LAPD narcotics detective Alonzo Harris, I find it difficult to care about almost anything that happens in the plot, including the way he treats his "daisy fresh rookie," Jake Hoyt (Ethan Hawke). It takes about an hour before a conflict with actual stakes appears, a generic complication involving Alonzo repaying gambling debts with stolen money; "good" police gone bad is not exactly a novel concept. I could have just rewatched To Live and Die in L.A. for a well-made example of that premise. Also, as a note on historical context, Roger Ebert mentioned in his review that audiences might not "accept this movie in the current climate, when cops and firemen are hailed as heroes," since the film opened a few weeks after 9/11.

Additionally, I was seriously distracted by the casting of Ethan Hawke as the naive partner whose innocent belief in justice is shattered by his experiences with his new mentor. As wonderful an actor as he is, Hawke looks close to the same as he did in Before Sunrise, so I kept imagining the scenarios that led Jesse to this line of work. Somehow I don't think that's what Fuqua and screenwriter David Ayer intended.

Oh, and the ending is a cop out. Pun very much intended.

The Films of Denzel Washington: Ranked (So Far)