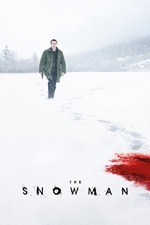 Director Tomas Alfredson has tried to explain away the lack of coherence in "The Snowman." He's told us that 10 to 15% of the script was never shot. How Multi-Academy Award winning editor Thelma Schoonmaker was brought in try to make something, anything out of the film.

I assure you, dear reader, this minor spoiler will not ruin the impact of learning the main character's name. Which, I will remind you, is Harry Hole. I assure you, every time Michael Fassbender's character is mentioned during the film's two hour running time, it's never not hilarious.

You have to be kidding me.

"The Snowman" is a boring, mess of a film which, despite their best efforts, could not be saved in the editing room. Their efforts are obvious. Large sequences are explained in voice over. Aspects of the film are edited around. But try as they might, the film cannot recover from its missing pieces.

Story line threads go no where. Characters disappear, reappear, and disappear again. Every actor is using a different accent. After a bout with cancer, Val Kilmer is completely overdubbed, but did they have to use the voice of Bane? It's odd choices like this that plague "The Snowman."

I'd like to think I'm a pretty clever guy. But, gun to my head, I couldn't come close to explaining why the killer does what he does, why he kills who he kills, or why he uses a snowman as a calling card. Every film of this type has a scene where motivations become clear, where the killer's reason is explained. "The Snowman" leaves all of that up in the air. The only explanation is that the filmmakers can't explain it either. They've lost the plot. Literally.

The film isn't helped by its slow pace or monotone performances. Michael Fassbender's *clears throat* Harry Hole is an alcoholic, but he rarely drinks during the films running time. Rebecca Ferguson tries her best to bring some energy to the film, but this film is too much of a slow-paced bore to overcome.