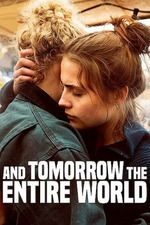 And Tomorrow the Entire World

Julia von Heinz's And Tomorrow the Entire World opens with a passage from Germany's constitution which states that the country's citizens have the right to fight using any means necessary if democracy is threatened. Given Germany's history, you can see why it was originally written in, but those who drew up the constitution couldn't have foreseen the 21st century, when the slightest grievance causes citizens to compare their government to the regime Nazi Germany. The phrase "Nazi" is flung about so often now by those on both sides of the political fence that it's in danger of becoming meaningless.

Of course, genuine Nazis are on the rise again, and worryingly, they seem to be gaining traction in Germany of all places. 20-year-old Law student Luisa (Mala Emde) wants to battle the emerging Fourth Reich and so accepts her friend's offer of joining an anti-fascist commune. For most of the commune members, fighting fascism equates to selling home-grown produce at vegan markets, painting banners and shouting slogans. Under the leadership of Lenor (Tonio Schneider), they deliberately avoid violence, believing it would undermine their message.

Among the ranks however is Alfa (Noah Saavedra), who believes that the only way forward is to take on the Nazis at their own game. When Luisa steals a burner phone from a skinhead at a rally, Alfa and Lenor go through its contents and uncover a conspiracy involving a notorious Nazi who went underground a couple of years ago but who seems to be secretly leading a new generation. This leads them to find a secret stash of explosives equipment, which fuels Alfa's desire to escalate his campaign. Driven by her attraction to Alfa, Luisa rejects the commune's pacifist philosophy and joins Alfa in smashing up Nazis' cars and faces. More...