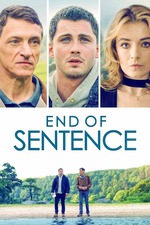 In ersatz road movie End of Sentence, a running joke involves an American having to drive a ‘stick’ instead of the automatic he is used to, resulting in frequent comedic lurches of the hire car as said hapless driver struggles with the manual transmission. The cheery conceit could well be a metaphor for this scrappy and witty feature length directorial debut from Elfar Adalsteins, which, although at times ungainly, certainly takes its audience on a daft and fun trip. Likewise, Michael Armbruster’s canny screenplay involves many abrupt narrative gear changes which wrongfoot the audience: just when we assume the film is going one way, the plot or a character surprises us and further makes the shaggy dog journey of End of Sentence a roadworthy, immensely enjoyable experience.

We open heavy: a middle-aged couple (Frank and Anna: John Hawkes, Andrea Irvine) visit their son in the big house, where the twentyish Sean (Logan Lerman) is doing a short stretch of bird for grand theft auto. In these early scenes the film is thin lipped and serious. Anna, a woman dying of aggressive cancer has come to the prison to see her wayward son for the last time: an officious screw tells her to remove her headscarf, which leaves Anna, and her chemo-baldness, exposed. Soon after, Anna passes on, and Frank, although surrounded by polite mourners, seems completely alone at the funeral. Just as well that Sean is due to be released, then? Not so fast. Father and son are at embittered odds, with Sean holding on to some lingering childhood resentments, most notably that Frank, an absolute milquetoast, didn’t stand up to his son’s abusive grandfather.

Via a brief confluence of narrative contortions, the estranged odd couple - Sean streetwise and tough, Frank weedy and bookish - nonetheless wind up taking a road trip from the States to the Emerald Isle in order to deposit Anna’s ashes in a lake. Our first evidence of the screwball energy which the films dips into comes when cautious driver Frank is flipped the bird by an elderly female driver (haha, old people swearing), confounding any disagreeable concerns that this could be the start of a worthy, sentimental journey (I mean, of course, the learning and the healing will duly arrive, but in End of Sentence it feels earned, rather than rote). The film does, however, take a little while to get moving in this first act. An extended scene with Anna’s Irish relatives is broad and airless, ultimately a bit pointless in terms of drama, except perhaps to hint that the saintly Anna had a few unwelcome secrets herself. More...

And Tomorrow the Entire World