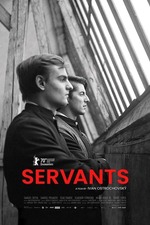 In the manner of Goodfellas, Ivan Ostrochovský's Servants opens in media res with the aftermath of a killing. Two men drive a car to a secluded area and dispose of a body before wiping blood off their shoes. This isn't some mob hit, but rather a state-sanctioned killing. We're in the Czechoslovakia of 1980, where those who defy the authorities are routinely disappeared and disposed of.

Servants' narrative subsequently takes us back several months as two young men - Juraj (Samuel Skyva) and Michal (Samuel Polakovič) – are enrolled at a dour Catholic seminary. While the practice of religion is technically banned, the state has worked out a compromise with a Catholic group known as Pacem in Terris, allowing priests to perform their duties under the watchful eye of the state. This is in direct contravention to the orders of the Vatican, which has decreed that priests are forbidden from collaborating with the Communist Party.

There's much hypocrisy at play in this scenario. Like the Soviet version of Communism, the Catholic Church preaches equality while its leaders live in a luxury denied their followers. But Ostrochovsky isn't interested in exploring the Church's sanctimony. In his eyes the Catholic Church is a resistance movement, battling Communism, which is portrayed with all the nuance of a 1950s American 'Reds under the beds' propaganda short. More...