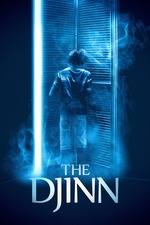 Horror movies have seen all manner of demons summoned by unwitting fools. Usually it requires some sort of incantation spoken in an ancient language like Latin, Hebrew or Sumerian, or maybe you just have to say the name of an urban legend three times in front of a mirror. Writer/directors David Charbonier and Justin Powell's The Djinn features an incantation spoken in front of a mirror, but the twist here is that it's uttered not in some old lingo, but in American Sign Language. The effect is just the same. That is to say, not the outcome our protagonist hoped for.

Following his mother's suicide, which we glimpse in a flashback, mute 12-year-old Dylan (Ezra Dewey) and his father Michael (Rob Brownstein) move into a new bungalow home. As Michael is a graveyard shift DJ, Dylan is left alone on the first night in their new home. Bored, he starts rummaging through some bric-a-brac left by the house's previous tenant, an elderly man who apparently took his own life. Among the leftover possessions Dylan finds a book of spells called the "Book of Shadows." One spell purports to grant its summoner one wish, and figuring he has nothing to lose, Dylan performs the rite, wishing for "a voice".

It seems to have had no effect, and Dylan retires to bed disconsolate. But when he investigates some noises, he discovers he's not alone in the home. Dylan should have read the small print on the spell, as in order for his wish to be granted he must survive an hour with a Djinn, who can only be destroyed by blowing out a candle when the clock strikes midnight. More...