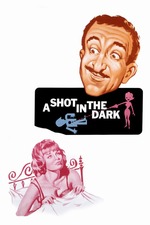 A Shot in the Dark

My first Pink Panther experience (besides the one with Beyoncé) and what a relief this was to watch something that I could just sit back and engulf the silliness. This type of slapstick comedy and parody isn’t necessarily my favorite so I wasn’t expecting to love it but I also wasn’t expecting to enjoy it and it turns out that this had a couple gags that tickled the gut.

If you’re not familiar with the Pink Panther series then get out of that rock you’ve been hiding under, just kidding but it’s basically a series of comedy-mystery films that features a clumsy French detective named Inspector Clouseau who miraculously always solve the case. Dr. Strangelove’s very own Peter Sellers plays the inspector with such ease. Honestly, he’s perfect for this role as he never seems to go overboard with his clumsiness and clueless mentality. On the contrary, he’s quite likable. Sellers does a great job at making me not only laugh but also caring about solving the predictable mystery.

I suppose the gags that got me to laugh the most was the Inspectors friend Kato who pops up randomly to sneak attack the Inspector for his karate training and he does so throughout the film during some hilarious moments when you would least expect it. One more sequence that deserves to be mentioned is when the suspicious killer tries to kill the Inspector but keeps failing and killing an innocent bystanders while he’s on a date. It’s incredibly funny as there is this dark and moody score that plays each time he appears. So clever.

However, with all that said, it’s still not my cup of tea at the end of the day. I’ll more than likely never watch this again because there isn’t really no point to the story. The characters are there to make jokes and just be completely forgettable after the film is done but it’s certainly a film worth seeing at least once.

Seance on a Wet Afternoon