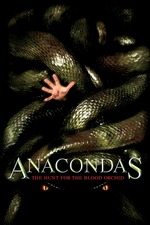 Everyone has guilty pleasures, whether they want to admit it or not. Anacondas 2 was my late mom and I’s guilty trip down a very nasty amazon with some of the worst company to ever have to be our tour guide.

Seriously, the characters are so annoying. There is one character who never shuts up and most of his lines is him screaming about how everyone is going to die. I found myself hoping and wondering if their demise would come quickly. Unlike the original with some A-List charm to give a lackluster script a little more flare, this installment has the poor-man’s Hillary Swank, Jeffery Dean Morgan, Pam Grier & LL Cool J, these B-Listers just doesn’t cut it or make it anymore exciting.

In survival horror, I must like the characters in order for me to be fully invested, this film makes it so hard to enjoy a single character. The Pam Grier wannabe comes off as moody, snobby and completely unlikable in the matter of her first two scenes. The only character that has likability doesn’t even speak a language and that character is a cute monkey as it’s the only smart character too.

Enough about the characters cause who truly gives a poop, we’re here to see some snakes kill some people and well, I don’t even get that considering the crappy CGI snakes doesn’t feel real and the PG-13 rating makes the jungle feel like a kids playground but whatever, there are some genuine thrills at least.

It’s a cheap film that has aged poorly but even in its hay-day when Anaconda the original was cool, we all know this wasn’t a good idea to begin with and it certainly doesn’t help without JLo and Ice Cube’s presence.