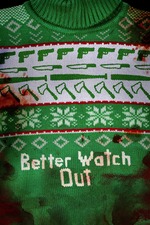 You ever watch a film that is so over-the-top that it owns up to it and that overweening feel makes the film more fun? That’s not the case with this. This isn’t fun, it’s just cringe and most of the agony I was going through while watching is due to one specific performance, I mean, every component was mediocre but this unconvincing performance takes the cake. I do respect the altered plot twist, instead of having your usual babysitter fight off a murderer trying to break in. It’s very disappointing this film took this already ridiculous plot so seriously without going the extra mile and having fun with it.

Now, I hope the best for Levi Miller as an actor but every ounce of me wishes the director would just tell him to tooooooooooone it down and stop trying so damn hard and let the character come out naturally because this film HAS to have the viewer believe his character in order for it to succeed and unfortunately you could tell he wasn’t comfortable with his character and I actually felt bad for the kid while watching.

With my biggest complaint aside, I truly wish I enjoyed this but I found it cheap and generic as hell. Nothing feels real and most of that is due to the direction and writing but the performances didn’t help any. There is one scene I have to mention and the only scene I liked and that’s the hanging scene which was such a clever idea.

Very disappointed with this because of the lukewarm ratings and reviews I’ve read from you all but this was a total letdown that feels like some 11 year old’s perverted wet dream who’s going through puberty. Very naughty, not even fun naughtiness. If you are looking for a Christmas horror film, I’d recommend the absurd remake to Black Christmas, at least it owns up to its absurdity, just “Better watch out” for this one.