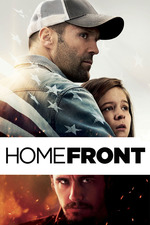 The performances are fine, regardless of Statham’s abysmal southern accent that literally doesn’t return after the film’s introduction. The action is average at best. What made this film generic as possible is the stale dialogue that consists of nothing but insults, swearing, cheap #girldad talk, screaming and threats. The way the film introduces the characters is also unintentionally funny: James Franco is introduced beating drug headed kids up with a bat, Kate Bosworth is yelling and cussing at teachers and insulting kids, Winona Ryder is introduced with one of the most quickest and randomly absurd sex scene and even Jason Statham is introduced with an obvious fake mullet with biker gear. It’s weird. If you can’t tell, I did not enjoy this film.

“Whatever you’re thinkin’... rethink it.”