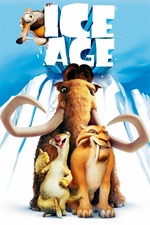 “I don't know about you guys but we are the weirdest herd I've ever seen.”

There used to be an age of time where an animated film could fit a charismatic cast of characters with fantastic chemistry, witty & quotable dialogue for adults & children, heartfelt messages about family & friends, tearjerking moments that makes you say “awwwww”, adventurous action that makes the journey fun and awful animations that makes you feel old but grown to love & reminisce... all of that in under 81 minutes. This film is rare ladies & gentlemen and it deserves much more praise.

There is a specific scene that I just don’t see in kids animations anymore. When Manny (the mammoth) sees cave drawings of other mammoth herds and he starts to cry because he misses them, it moved me because not a single line of dialogue or explanation was needed to feel that moment. Not a back story nor a flashback. The film doesn’t treat its viewers like their dumb and explains everything. We can actually come up with our own conclusion of why he’s staring and crying at the drawings, we can relate to him by our own feelings. It’s a simple, quick but beautiful scene and it’s all we need to sympathize with a core character. I wish more films wouldn’t drag out such scenes or development for characters because it makes the film feel much longer, instead, that scene is shown and Manny’s past is never brought up again and the film focuses on the journey. I absolutely love the direction in this film, I just don’t see it that often in other animations, more scenes than one, this whole film moves at such a pleasing pace.

I suppose my biggest nitpick is the use of original score as key moments needed an extra boost with a much more energetic score but if I wasn’t such a fan for movie scores I’m not sure it wouldn’t matter but it really bugged me how stale some action scenes were due to the lackluster score. Sorry but the other Newman brother would’ve been much better.

Nonetheless, as a kid I remember enjoying it but not to this degree now that I’m older, maybe I was so stuck on the Toy Story and Pixar hype that I forgot about how great this film really is. Definitely jogged down memory lane with this one and found out that this has “aged” wonderfully. Very pleased with this watch.