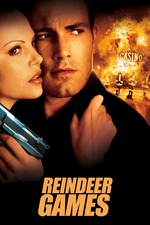 Welcome to the biggest, grimiest and most jolliest guilty pleasure of mine. This is easily one of the most awful heist film I ever seen but again, it’s a stench I’ve grown to like. What are some examples of the dumpster fumes that reek all over this film you may ask? Well, I’ll list them down for you and check it twice to see if this film is naughty or nice, you decide;

The Nice List
1. Charlize Theron explicitly showing off her “assets”.
2. Some incredible cheesy lines that makes this film stupid fun for all the wrong reasons. “Naw-uh, f**k that. Nick doesn't do anything until Nick gets something for Nick. I want some hot chocolate. You want to hear about some Indian casino, I want to see some hot chocolate! And a piece of pecan f**cking pie!”
3. Gary Sinise using Ben Affleck as a human dart board. (Wicked fun scene)
4. The banging Christmas soundtrack and aesthetics. (Santa suites was a nice touch)
5. Ashton Kutcher randomly showing up for one scene, having a goatee and running around in a cowboy outfit (I can’t make this crap up)

The Naughty List
1. Charlize Theron showing off her “assets” BUT in the most vulgar way imaginable.
2. The incredible bad acting from Gary Sinise, Ben Affleck, Charlize Theron & everyone involved.
3. Danny Trejo always playing the same role to the point he never takes off his vintage leather vest even in harsh temperatures that would make anyone’s nipples freeze.
4. Ben Affleck killing a dude with a squirt gun. (That is not a joke, completely serious)
5. The atrocious writing of a middle schooler using one of Grand Theft Auto’s side missions for an idea for a heist film. (That could be a complement depending on how you view it)
6. THE AIMLESSLY AMOUNT OF CLOSE-UP SHOTS. I NEVER KNEW HOW MUCH BEN AFFLECK’S SMUG FACE COULD BE THIS ANNOYING.
7. Charlize Theron sloppy tongue kissing every man on set.
8. THAT PREPOSTEROUS ENDING TWIST WAS THE STAR ON THE TOP OF MY CHRISTMAS TREE.

As you can tell this is a very, very, very naughty film that will be getting no presents from Santa this Christmas, nor any Christmas for that matter.