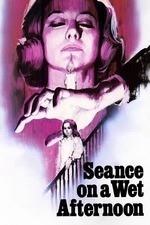 Seance on a Wet Afternoon

A demanding wife schemes up a plan to kidnap a child from a rich family in order to make her more famous as a medium and she gets her obedient husband to help her.

Yea, as you can tell the motive is extremely silly and obvious that it’s damn near impossible for that plan to succeed but I gotta hand it to our two leads who sale this bizarre premise and completely baffled me with surprise by how intrigued I was with the outcome because their performances are so top-notch.

Kim Stanley as the unpredictable wife left a big impression on me. She steals scene after scene with her delusional demeanor and excellent poise but the final seance scene where she basically transforms into multiple characters left me speechless. The always great Richard Attenborough also delivers an incredible performance as the husband who is basically his wife’s slave as she manipulates him into doing her evil deeds. If he can make me feel empathy for a character who does some awful things then that actor is doing a very fine job at making me feel for their character. Two impeccable performances that makes this worth while.

As for the thrills and seance scenes, there’s not many but like I mentioned before, it wraps up nicely with a final scene that gives you a perfect conclusion but unfortunately before that there wasn’t enough there to boost up my rating but it’s certainly a film I recommend for the interesting plot, two mighty fine performances and an unforgettable finale.

A Shot in the Dark