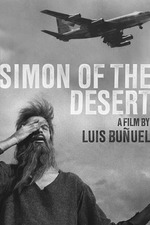 It’s funny, if I wasn’t so used to Luis Buñuel’s style, I would’ve rated this lower but since this is what he does and since I’ve seen so much of his work, I can’t help but respect him cause he has been around for a long long time and each film gives me a big laugh at the end of them.

Buñuel may be the master at religious satire, I don’t think it’s a question. He’s simply great at displaying his views without preaching, instead he just makes fun of it and for that, whether I disagree or not, I tip my hat to him cause he does it well. It’s only 45 minutes but it shows a saint who basically can’t get a break and is tempted by the devil. “She” wants to take him to the Sabbath and since I don’t want to spoil anything, where the Sabbath is, it will guarantee to make you laugh and that in my opinion is the awaited joke that absolutely lands.

It’s certainly not my favorite Buñuel film but it’s another one that gets my respect because there’s no one in the business that has this man’s imagination.