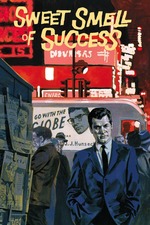 An obsessive brother uses his publicist to tear apart his sister’s love affair.

Powerhouse performances from Burt Lancaster & Tony Curtis. Lancaster’s character J.J is easily one of the most pettiest characters that I’ve ever seen on screen. Curtis’s character Sidney is just as rotten. Both will do despicable and sinister acts to get what they want. No humanity or mercy for anyone that stands in their way and both talented actors confidently plays these slimy characters well.

The script is incredibly snappy, witty, clever, sophisticated, sharp, however you want to put it, it’s some of the best dialogue I’ve heard in ages.

The cinematography is dreamy. For some reason the Black & White looks more posh than other films of the 50’s. You can see each breath coming from our characters while outside in the brisk New York cold. The cinematography just has this vintage flare to it.

Even after all that I loved I can’t help but to almost be completely let down by it’s climax. This film is unlike any other film made during its time but that lackluster ending sorta put a bad taste in my mouth. There is also a performance coming from a key character that was extremely underwhelming.

Nonetheless, this is a deep dive into the underworld of being a corrupted columnist and it’s definitely one worth seeing due to its 2 leading performances and stellar script.