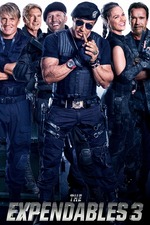 They totally went away from what I loved about the second one. This one is even more worse than the first. The new cast or new UFC fighters trying to act is filled with so much staleness that a loaf of bread that’s been left out for a month gives a better taste in my mouth unlike these cringe worthy performances. This tries way too hard to be serious, there’s hardly any fun action scenes and the focus is on these bland case of new comers. If this is the last one what was the point of this decision to bring in a new cast and focus around there uninteresting characters? What makes the second work is chemistry, how’re we supposed to get invested into these lifeless characters? Better yet, if you are going to have a new cast why not bring in someone who’s occupation is acting? Even when there is action it’s so corny and boring. Mel Gibson tries his best as the villain but even his scenes as a villain doesn’t add anything to his supposedly “menacing” character. For example: there’s a scene with him buying art and that’s it, seriously? SERIOUSLY?! He dislikes a piece of art and buys it anyway? OH MY GOSH HE’S SUCH A BAD GUY!! Seriously, people this was bad, really bad. I’m honestly upset because the second installment was such a good time. Way to drop the ball on this one guys.