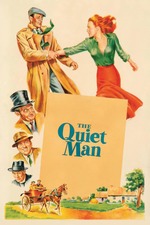 It was bound to happen sooner or later. One of the very few films with the sounds of bagpipes and Celtic roots that I did not enjoy.

John Wayne drops his cowboy guns and turns soft for a woman once he returns home in Ireland. He plans to marry her but needs approval from her family. It’s just simply uninteresting for my taste. The drunken humor doesn’t work. The only humorous aspect is how this exaggerated plot is finished, which finishes in a fight that leads them to be friends, cause violence settles everything? Other than some incredible shots of breathtaking scenery and some incredible chic wardrobe, I found this a complete bore.

Side Note: In my recent reviews it may seem as if I’m just going down the line of the 50’s decade and giving each film in that era a negative score but I assure you, that is not my intentions. I don’t watch films to lash out my nitpicks and surly don’t watch films that I hate just so I can complain about them on here. This is just new ground for me and once I cross that film that absolutely captivates me, it will feel that much more important.