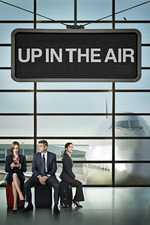 Brutal, brutal, brutal film in the most subtle way possible. “This is a film for adults.” says another random reviewer on this app and it’s one statement I completely agree with. There is a vital scene where Clooney is coming to realization that maybe his philosophy on life has lead him down a very, very, very isolated path. It’s a path that I myself took before I fortunately found my “Co-pilot” . This is a film that had me questioning my own life principles.

What I enjoyed most about this film isn’t the sweet endearing moments that leads you to believe that this is a safe romantic character study that is powered by a stacked cast showcasing their talents but it’s the sledgehammer of reality that this film slams in your gut near the end of this film that I applaud. Although this isn’t necessarily a film I usually come back to and although this film is titled “Up in the Air”, I highly recommend this film for its down-to-earth ending and it’s sincerity of the ones who finds the true philosophy on life a little too late.