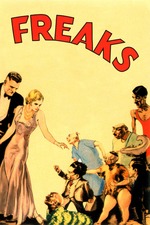 I honestly cannot believe this film was made. By a director who was internationally famous and whose most important work is a cultural touchstone like no other. I wouldn't call it brave on Browning's part, but it is certainly bold.

That this was his passion project also interests me. And on watching the film I was almost ashamed to realize I'd considered it so utterly exploitative, based on what I knew of Violet and Daisy Hilton from a favorite musical of mine, "Side Show." I mean, in a way it has a "come look at the freaks" interplay initially, what with the quickly filmed framing device, but as one other reviewer mentioned, we are never shown any of the "freaks" (a term that hurts me to say but is almost necessary when discussing the actors in this film) performing on stage. In fact, the only time we are in the ring and under the big top is when the abominable Cleopatra is descending from her high wire act.

The film makes it abundantly clear that the "freaks" are not the disabled and unusual people at all, but the people taking advantage of them. I mean, it's not even remotely hard to understand. This film hates Cleopatra and Hercules more than it fears Hans & Co. I couldn't believe what I was seeing. And in a way it makes sense why this failed: audiences likely did not enjoy being told that they, being likely able-bodied and so-called "normal," were the ones to loathe. And not just because of who they were, but how they felt. Nobody likes to be called out on the choices they make, and the choice to be prejudiced is one people who have it deep-seeded in their hearts is one it is almost impossible to reconcile within themselves.

This film is a masterclass in empathy. I think it's thanks to the inclusion of Leila Hyams' Venus, whose role as audience character also allows her to love and understand the people she comes to know as her family. Without her it likely would be just as powerful, but looking back on it it is clear that she is built to be the best ally the company can have. In fact, she is almost a mirror image of Cleo, with a similar hair style/color and drawn on eyebrows. She could be Cleo, but she chooses not to be. She chooses to be caretaker and friend to her fellow workers. Cleo is too blinded by money and prejudice to see the people in "freaks" that she cannot even comprehend being "one of them." This divests them of their humanity in her eyes while also painting her, in the eyes of the audience, as inhuman.

I still can't believe this film was made. That we got to see these people, these faces and bodies, on screen and loved by us (in Venus and Phroso) and each other. This is probably one of the most important films ever made, and it's a shame we can only talk about in 2019 in terms of how exploitative it (seemingly) is.