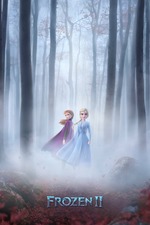 Alright. I waited several days to write a review of this film. I wanted to let it percolate up in the old noggin', how I felt about it, how others talked about it, why I cried for the last third. Whether it's actually a good film at all, or deserves the four star rating I'm giving it. And after several days of thinking on it, I still think so. Because watching film is entirely subjective, and this one affected me hard.

I've had issues lately claiming my own feelings about things. Issues articulating how I felt because if I did so, it would go against the narrative the culture around me has built up to be acceptable. I haven't wanted to be "problematic" in any way, and the more I whittle that down it just means everything will be problematic to someone else, but I shouldn't be afraid of how something like this silly little sequel to a kids film makes me feel. And I'll tell you, it made me felt...

I started crying when Elsa entered Ahtohallan. Others have claimed, and rightfully so, that Elsa's arc is analogous to coming out in the LGBT community. I always read the hiding of her powers as a metaphor for anxiety and depression. And so as she sang "Show Yourself," I realized how deeply I needed such a metaphor on screen played out to a powerful and satisfying conclusion. In the first film, Elsa found that she had a support system to deal with the trauma that was induced in her. She had to learn to control her powers so that they would not harm other people or disrupt society's order, which is where she is at the beginning of this film. But it felt like she was made to believe her powers were the source of her trauma, rather than fear of the unknown in others forcing her into hiding.

That's what depression is to me. That's what MY anxiety is. My fear of my true self being known, and it keeps me in bed, or constantly hearing disdain in others voices. I found a support network like Elsa's in the first film, and they see me just as I am and love me. But it's still taken so long for me to see myself as being worthy of living my life at all. The purpose of this film, then, is for Elsa to find support in herself, to reclaim what her powers truly are. To see herself as whole and beautiful and powerful. "Show Yourself" isn't just a request to the Voice that is calling her, but a command to herself, to bare every part of her soul and be completely vulnerable. To herself. And deal with her complicated emotions about life and newfound liberty and still clinging to the old ways. And to a lesser extent, this is also the realization that Anna must come to by the end, as her song is a journey from mourning Elsa's assumed loss to standing her own ground and finding independence of her own.

And they both do so, and by doing so save Arendelle, the Northuldra, and each other. It's so remarkable to see such a journey as this in a Disney film, but it's no wonder after all. Disney has been building to something like this with their Princess films for years, and in my opinion, this is one of the most important lessons they have taught young girls this far. Believing in yourself is one thing, but knowing and trusting yourself is another, and it's something that has been missing in our ultra-modern and radically feminist narratives dominating our media at this time. Introspection is so often missing, and it's honestly necessary to be human.

So for me, this movie is about finding your inner light and being your own guide. It may not resonate with some audiences, and some may even call its story weaker than the first (though no one is knocking its absolutely incredible visuals), but for me this hits home in a way no films this year have done before. I needed Frozen II right now more than I could have ever known, and I hope that despite its mixed reviews, others also make their way to Ahtohallan and find out who they are, and become themselves twice over. I am found.

Dolemite Is My Name