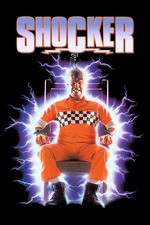 "You bought into TV Pinker, now you're bound by its rules."

Wes Craven's New Nightmare often gets reduced to a mere preliminary exploration of the themes that will get seriously treated with the Scream franchise, or an explicit statement of the upcoming franchise's guiding principals. (I think there are important theoretical continuities but I'm skeptical of either simplistic reading) Shocker, though, may be a preliminary version of the both of them. The importance of the news prefigures Gale Weathers and a TV is used here in the same symbolically significant way that one is used in the first Scream's final kill. And Shocker's picture of evil taking the form of media for the sake of effectiveness, but becoming thereby vulnerable and humans being able to fight it in this form may be New Nightmare's essential theoretical concept beyond the explicitly stated one about capturing evil in stories. I leave this with the same takeaway as New Nightmare: humanity's fight with real-world evil takes place in narrative. (I'm not wholly convinced, don't get on my case about this!) It also starts the equation of dreams and media/stories that’ll appear in New Nightmare. At under 2 hours, it doesn't have room to do anything with these theories that won't be more fully explored in Craven's later works, but it's still an interesting and clear reformulation (or I guess given the chronology it would be a preformulation) that's also less annoyingly meta than them.

Otherwise, you should also watch it because (as lots of other reviewers have pointed out) it's a super fun movie. Humor that's more good-natured than the coldness of Last House on the Left or the condescension of Scream and a use of effects that's pretty unique. 3 acts that are totally disjointed and unique in a way that means post-watch reflection is full of “oh yeah I forgot about that moment! That was awesome!”’s. Also, notice the reference to The Empire Strikes Back: the scene on the broadcast tower with the ambiguous father figures references the Cloud City "I'm your father" scene, showing us how the fight with evil is taking the form of already existing narratives, like Heather's son in New Nightmare using the Hansel and Gretel story to defeat Freddy Krueger!

The Hills Have Eyes

The Last House on the Left