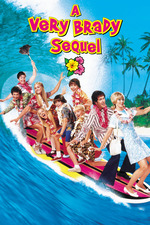 The Brady Bunch Movie is one of the most underrated and misunderstood comedies of the '90s, a film that uses its ingenious metafictional premise not just for affectionate nostalgic parody but also for clever, surprisingly biting social satire. Betty Thomas's 1995 film attacks the affected cynicism of the grunge '90s and the affected sunniness of the Brady '70s in equal measure, and in pitting them against each other the film reveals how both eras use their seemingly conflicting pop cultural trappings to paper over the same fundamental ugliness and rot.*

Unfortunately A Very Brady Sequel suffers from the same diminishing returns and creative lethargy that plague most comedy sequels, largely ditching both the politics and the aesthetic rigor of the first film to more or less become the tepid nostalgic cash-in everyone unfairly assumes the first film to be. The central premise and the cast who execute it are still excellent, of course, and the film does introduce a number of initially promising ideas that could have meaningfully expanded on the first movie's satirical groundwork, like its reversal of the general dynamic from the first film where this time it's a '90s guy trying to navigate the Bradys' world instead of the other way around, or how the main plot revolves around the convoluted history of a kitschy background prop in the Brady home, or the subplot exploring the inevitable (but obviously never even slightly acknowledged on the show) sexual tension between Greg and Marcia.

The trouble is in the follow-through. The jokes this time around just aren't nearly as inspired, incisive, or funny, and they never coalesce into any kind of cohesive point. The movie is really only interested in breezy silliness and thoughtlessly peddling exactly the kind of empty pop nostalgia the first film always made sure to undercut or problematize. Where the first film found most of its humor in the Bradys' inability to process anything outside their blinkered family sitcom worldview, this film more often than not just treats them as generic credulous idiots. Far too many of this movie's jokes are no different from what you'd get in any other goofy catchphrase-based '90s comedy. It certainly helps that in this case the goofy catchphrases in question have a fun postmodern twist to them, but that alone isn't enough to carry the whole movie.

That said, at least this film gifted us with an incredible and versatile reaction GIF in Christine Taylor as Marcia's "sure, Jan." Plus her pronunciation of the word "school" will never be anything less than hilarious to me.

*Possibly my favorite example of this being how the movie sneakily equates Bobby's cutesy "safety monitor" shtick with police brutality and even fascism.

Those liked this review