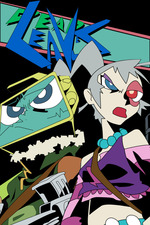 Watching this only made me appreciate my beloved FLCL (with which this shares some creative personnel) all the more. That show's similarly frenetic pace and hyperkinetic visual style often make it feel similarly chaotic as a whole, but breaking it down to its component parts actually reveals an astonishing amount of formal rigor. Each individual composition has an intelligible purpose and each individual scene has a consistent structure. The show's visual storytelling is perfectly coherent, it's just served a little diced and chopped and at a speed most conventional filmmakers would find reckless.

I can't say the same for Dead Leaves, which takes the loudest and dumbest aspects of FLCL's anarchic surface and haphazardly strings them together into a free-floating hyperactive spectacle with no solid foundation to ground it. The film still manages to be pretty amusing in its vulgar silliness, but those charms are short-lived, and when they wear off we're left with a rather vapid, nihilistic and pointlessly juvenile (FLCL is pointedly juvenile) headrush.