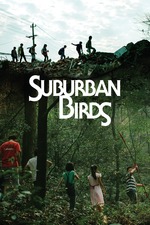 An ambitious and promising debut. I'm particularly impressed by Sheng's insight into group social dynamics; the way he keenly observes how his characters occupy physical space with each other, exposing the various emotional subtleties embedded in those minute interactions and exploring the tragic tendency among kids and adults alike to instinctively deflect or sublimate any complicated feelings that may arise within such microscopic expressions of intimacy.

More impressive still is the film's quietly brain-crackling Moebius-strip plot structure, by which the story gradually reveals itself to be taking place in some kind of fluid, indefinable liminal space between past and present, not unlike the groundwater trapped between surface and tunnel that so vexes the adult protagonists. The film in general is obsessed with these sorts of ambiguous in-between spaces, not just past/present but also childhood/adulthood, friendship/romance, work/play, construction/destruction, gravity/flight. The suburb itself is just such a place, not quite the city and not quite the country, perpetually suspended between demolishing and rebuilding itself.

Those liked this review