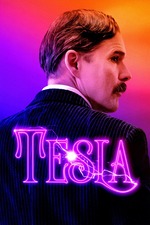 A perfectly nice little film for the most part, but man am I getting tired of this recent trend in biopics where they keep stopping the movie so the narrator can cheekily fill us in on whether or not what we just saw “actually happened.” It was cute enough when Adam McKay did it the first time, but at this point it’s no longer quirky or irreverent or Brechtian or whatever, it’s just a dumb cop-out for cowards who want to hedge their bets on their own ability to draw truth from fiction.

The movie employs a bunch of other strategies for pointed artifice that mostly fare a lot better (rear-projected backgrounds, Google searches, a colorful karaoke climax), but they’re not applied consistently or assertively enough to make much of an impact. Basically there’s nothing here that hasn’t already been done much better by everyone from Martin Scorsese to Derek Jarman.