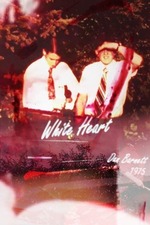 What Andre Bazin called film’s “indexicality,” the medium’s inherent capacity to record an “imprint” of reality, is really more of a useful fiction than anything, a necessary narrowing of our perceptive bandwidth to prevent us from looking at every film the way Funes the Memorious looks at a flower. Because in truth reality (such as it is) is just the first of an incalculable number of greasy mitts a film has to pass through on its way to us, and they all leave their mark.

Most films try their best to obscure or ignore this fact so they can guide us towards some semblance of a more holistic “meaning,” but instead Barnett’s film revels in it. This is a film about film (movies) as film (a translucent membrane through which our perception of whatever lies beyond it is filtered), playfully highlighting all the physical, linguistic, and epistemic noise between film and viewer that most other films work so hard to dampen.

The visuals are pockmarked with leader, scratches, marks and stains, and the audio is littered with skips, hisses, pops and echoes. A rose by its own repeated name doesn’t smell like anything, and the eternal bliss of Heaven becomes trite and boring the moment it’s rendered into words and signs by even (especially?) its most fervent believers. Barnett even engages in some comically literal indexicality of his own, with (presumably) his fingerprints appearing on some of the painted frames and two fingers holding a lit match peeking into the frame at odd intervals.

At times White Heart superficially resembles one of Stan Brakhage’s foundational “adventures in perception,” but while Brakhage invites the viewer to disentangle his images from the logic of signs and symbols, Barnett seems to argue that no such thing is possible, and instead only asks us to accept and appreciate the knottiness for its own sake. There can never be a truly pure image or thought or individual, because none of them can exist independently of the miasma of mediating influences that surrounds them. In Barnett’s formulation, the noise doesn’t just degrade or modify the signal, the noise is the signal.

Maybe Bazin was right after all. Maybe films really are an imprint of reality, and we’re the useful fictions.

Secrets in the Woods