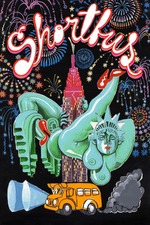 John Cameron Mitchell’s second feature in 2006 Shortbus sought to console, open up but most importantly liberate, not to shove unsimulated sex scenes in the viewer’s face though if I’m being honest, after some orgy shots I was done with them. This is not a conventional erotica because no sex scene is sexy nor actors pretty. Mitchell had pure intentions of presenting people in search of meaning, happiness and understanding in a place where they are forced to keep them shut. I didn’t love the movie because the message was explored maybe a bit more scattered than I wanted until it kind of falls flat in its face when things are happening all over again. But the message is there, at least. And we are not open about it.

We glide through a brightly lit contemporary New York City that is also designed so uniquely, and jump into the lives of these characters in an instant, as you would expect from the chosen style of introducing, from apartment to apartment, is a series of intrusion of their daily routines. James (Paul Dawson), a former sex worker, attempts autofellatio while his partner Jamie (PJ Deboy) is away and a stalker (Peter Stickles) watches him from afar. Sofia (Sook-Yin Lee) is a couples counselor and sex therapist who’s sinking in a void of desperation as she is yet unable to orgasm to completion (can you imagine that?). She has an unlikable husband. And there is another one, Severin, who achieves no pleasure from sexual experiences.

James and Jamie, during a session with Sofia, suggest that she try to spend time inside the salon. Entering the world of ‘Shortbus’ was like a journey of enlightenment for some, an embrace for satisfaction, for deeper human connection, to grow. It’s become a haven of answers for them, as it predictably ends with Sofia having an orgasm, the gay couple going for it, and the rest, you get the point. It concludes nicely. Everyone opened up, let others join in, and for the first time in a long time, sex wasn’t just sex. It can be something more if you put thought into it.

Lots of strange humor in the movie. Have you seen someone shove his face in another grown man’s anus and sing The Star-Spangled Banner before? Or a literal ‘period piece’? Or semen flying onto a Pollock painting like adding a layer of wet paint? You can’t and won’t find it anywhere but here.

I like what the director tries to say and the problem really is not the amount of sex on screen but the repressed feelings of the viewer to deny and hide away such everyday subjects. I think society is pressuring itself too much to counter the openness of this particular topic. Gender variation too, I forgot. Shortbus is a fine movie for the sexually insecure. “Open your mind. And everything else.” Considering we all might have gone through a stage in life where Paul Dawson’s character or Sook-Yin Lee’s (sense of loss of direction, not a pre-orgasmic status) mirror ours, let me rephrase: Shortbus is a movie for everybody. You don’t have to be different to understand. Just be...Open.