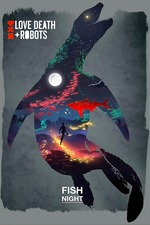 Hi everybody, an interesting idea a metaphorically brilliant concept and definitely not as straight-forward and on the nose as the many other episodes in the series, yet nothing more than a nice short bringing you joy for the time being but not as memorable as for example LDR: Good Hunting or "Zima Blue" that stick with you for quite a while.

The setup and visuals are amazing and honestly we have been waiting for some quick time events during the 10 minutes run as this could have easily been a typical "Telltale" game regarding the optic and style. The question of the memory of things, of living beings, of long forgotten time. This episode is a really beautiful and thoughtful episode, that gives us viewers a possible answer to the questions. The idea is definitely a wonderful consideration and for us this thought, is a way of giving mystical meaning to the world and its wonders. We don't think this episode deserves a completely separate film, but as a short film, it's plain and simply beautiful.

Pass on the LSD. Next stop the ocean in the middle of Downtown.