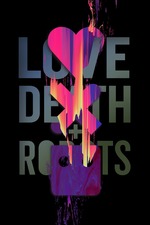 Hi everybody, what happens when you put some aliens out of the "Star Wars" universe, a few aspects of "Terminator" and the idea of "Highlander" into a world reminiscent of Arrakis in "Dune"? "The Mandalorian" only in mad (max)!

Imagine you could live forever, but never love forever, because the people you love will always die right in front of your eyes... they're just mortal. Due to a special and much sought-after mutation, you are damned to stay alone and defend yourself against everyone who comes and wants your genes. And it's easy to imagine what that looks like, if you've already seen the first season. Compared to “The Tall Grass” this episode is a real gore festival. Hands shot off, arms that are cheek by jowl with chests comparable to "Indiana Jones and the Temple of Doom" if it was R-rated, and a lot of blood and bones. Even though "Snow" has fast cuts and doesn't hold the camera too long on certain "wounds" it's brutal, one of the most brutal ones and believe us or not, still absolutely beautiful. Not only the ultra high quality CGI animations (the faces are the best looking ones in the series) and the environment literally bedazzle our senses but the ending and the message.

We have been looking forward to the second season of the "Love, Death & Robots" series for weeks, some of the episodes from the first season were some of the best short films we have ever seen and we have really hoped that at least one episode from this new season could keep up the quality of works like LDR: The Secret War or LDR: Suits but we didn't expect such a wonderful potpourri from many well-known and beloved film series, this episode is instantly one of our absolute favorites.

"Snow in the Desert" answers all significant questions to really experience and feel with the world, like "why of all things this planet", yet leaves us with enough questions for future material. We want to see more of Snow...