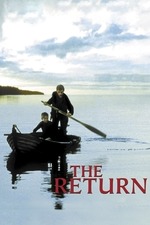 Film reviews in 22 sentences (or less)
Today: The Return

„If you weren’t so evil, I could love you like a father.“
(Ivan Dobronravov as Ivan)

Hi everybody, it is already a daily routine that we open Netflix and Amazon to see if there are new interesting originals and immediately close them again after a few moments, bored, so that we then take a look on YouTube for some insider tips or smaller films that are not so easy to get. Since we are big fans of Andrei Tarkovsky, most recently Aleksandr Sokurov and other artists of this guild, we came across this director here, with a little luck we found a few of his films on YouTube and we can only say, that "The Return" is really a unique experience. One thing instantly catches the eye, namely what influence our beloved Andrei Tarkovsky must have had on Zvyagintsev, because in his films there are themes similar to those of Tarkovsky's masterpieces, such as the return of water, reflections, fire and a pronounced good knack for wonderful camera work.

We devoured this film like a good meal, it was in the middle of the night when I started "The Return" and actually just wanted to watch a few minutes and continue to see it the next day, but couldn't stop one time till the end, a wonderful film experience. We're blown away and are already looking forward to the next films from director Andrey Zvyagintsev. The film itself is about two young boys who go on an almost mystical journey with their father, who suddenly reappears after 12 years of absence, a road trip to a deserted island on which the father confronts the boys with various challenges. What is the father's goal? If he wants to turn boys into men, is the film a parable about old ideals? All these are the central questions of the film, only let us anticipate that, especially towards the end, the film picks up so fantastically, that one is spellbounded and cannot look away. We had to watch the ending three times, because we wanted to let it work on us again and again, because it's so unique, because the film is very special.

"The Return" represents one of the most impressive directorial debuts, let alone the intense atmosphere, at several moments we thought to know the answers, to know what's going to happen in the next scene and at the end. But Zvyagintsev surprises various times and tells a story not by the numbers but human interest stories and they're not always predictable. The film doesn't take easy pathes and has no easy answers for difficult topics and primarily asks the audience what you'd do if a long lost parent suddenly stands in front of the door and wants (?) to be a part of your life... again or for the first time. As someone whose "relationship" to the own father is/was shaped by disappointment, hatred, helplessness and above all fear on our side (my mother and mine) I could relate especially with Ivan's point of view, but also the entire story and idea was personally touching.
Even if there is no own connection to the characters and plot, the movie keeps you on the edge brilliantly throws a few "MacGuffins" into the events (just like Hitchcock would have liked it) and establishes an ongoing guessing about real motives and identities.

All actors deliver an excellent performance (tragically, young Vladimir Garin who played Andrey drowned two months prior to the release), the constant threat of violence by the father who seems to be always on the verge of doing something unpleasant is perfectly embodied by Konstantin Lavronenko, a mysterious man who appears so distant, rational and
restrained in one second and so close and sane in the next. We would like to positively highlight the performance of the young actor Ivan Dobronravov, who portrays Ivan in the film. An outstanding, really great performance. In the first 30 minutes his acting is solid, but then he really starts to reach new spheres, the boy's great screen presence alone makes this film worth seeing. The two obvious reactions a kid would have in such a situation are remarkably portrayed through the facial expressions of the young actors conveying the opposite ways in which the both boys look at their father and react to his words: desperateness and embitterment, longing for a father figure with pride in the eyes and open rage with a grimace of hate because of the absence. And as already mentioned before, the dreamlike pictures are the absolute star of the film. We are happy to have discovered a new interesting director, from whom we are now going to watch everything we can.

"The Return" is an authentic film that is wonderfully captured, the choices of locations are simply beautiful, about the universal need to love and to be loved and the bond between a father and his son(s). It's a complex character study of relationships with characters that are alive, they can feel hate and love at the same time for the same person, their emotions are meticulously composed and the actors really have the range to show it, the film is consistently a great complete work.